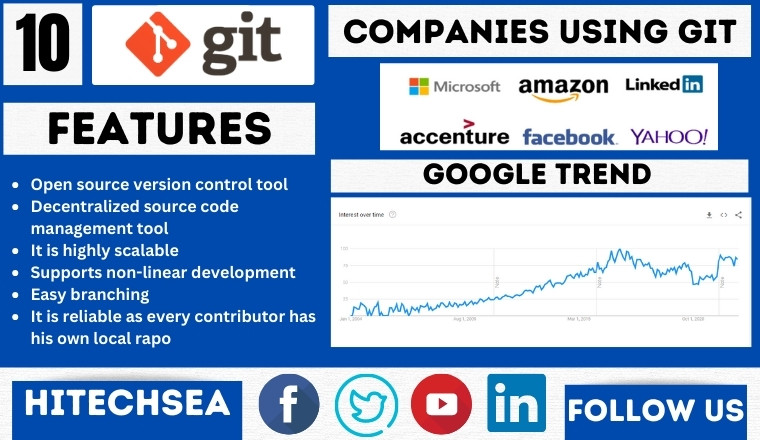 So Git is basically an open-source, decentralized source code management tool. It is highly scalable and supports non-linear development. It is pretty reliable as every contributor has his local repo as well. So that is why it is decentralized. There are a lot of companies that use Git. A few of those companies are Microsoft, Amazon, LinkedIn, Accenture, Facebook, and Yahoo. When you go to Google Trends and compare Git with Subversion Apache Subversion, which is nothing but a centralized version control tool, you’ll see that Git is way ahead of Subversion. 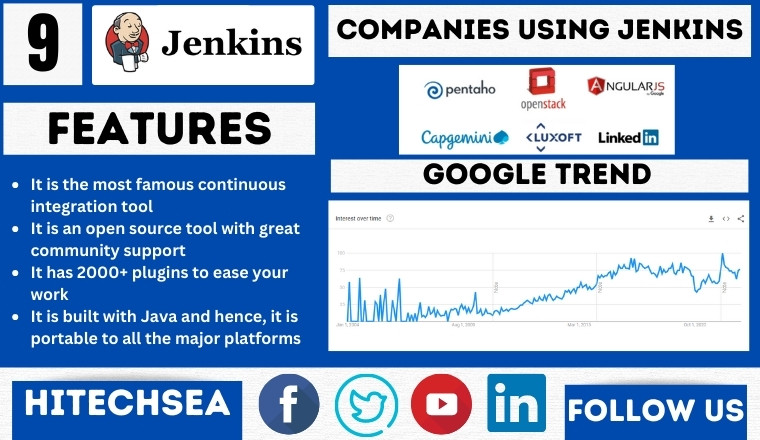 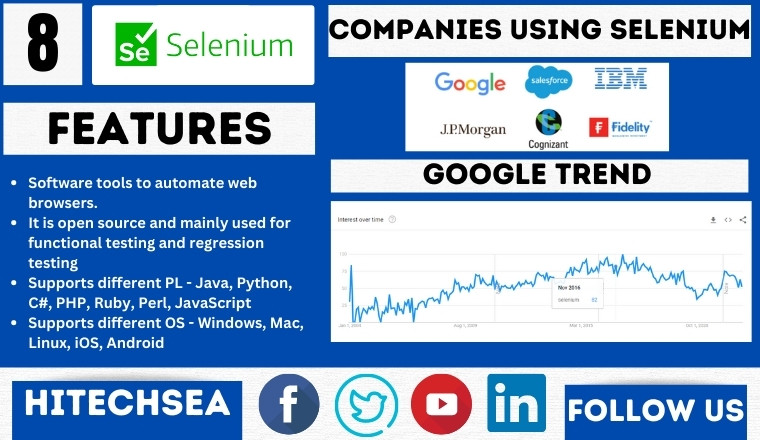 Selenium is a continuous testing tool and it provides a suite of software tools to automate web browsers. It is an open-source tool and is mainly used for functional testing and regression testing. It supports different programming languages, so you can write codes in Java. Python three sharp PHP ruby pull JavaScript It is pretty portable as well. So it works on various operating systems Windows, Mac, Linux, iOS, Android, et cetera, et cetera. There are a lot of companies that use Selenium. For example, Google salesforce IBM JPMorgan cognizant, and infidelity. When you compare Selenium with other testing tools such as APM and Test Studio, you see that Selenium is way ahead of the other tools. 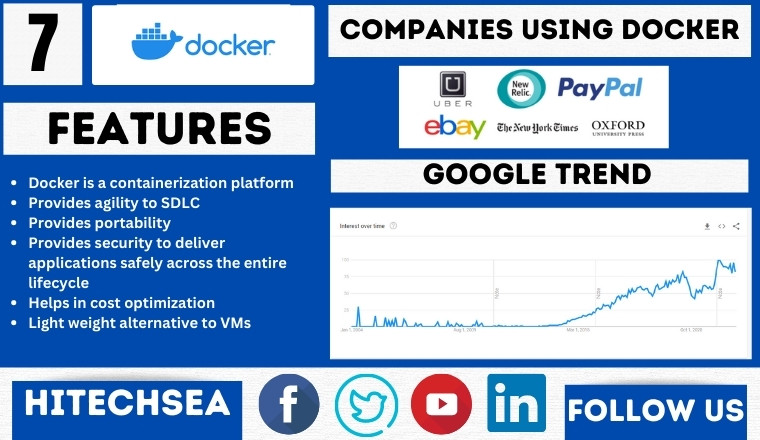 Docker is basically a containerization platform. What it does is it is basically a replacement for virtual machines. That is a lightweight alternative to virtual machines and it completely removes the problem where the code works in a developer’s laptop, but does not work in the test of the Prod environment. So it provides a consistent computing environment throughout the software delivery lifecycle. So what you can do with Docker is you can write your code in an easy-to-write Docker file, create an image out of that upload that onto the shared repository, and different teams can pull that image and create as many containers as they want. So there are a lot of companies that use Docker. For example, uber Murali PayPal eBay, New York Times, and Oxford University Press. Now, when I compare docker with waygrint, docker is way ahead. Right? You can see that from the graph as well. Docker is here at 97 and Vagrant is somewhere at eleven. 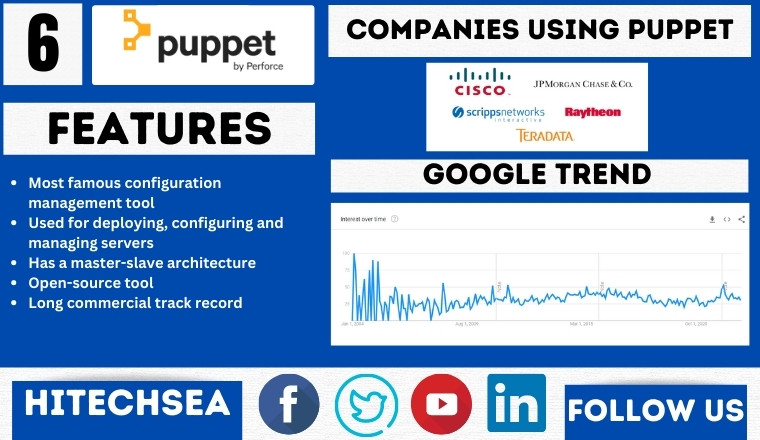 When I talk about Puppets. Puppet is basically a configuration management tool. It is used for deploying configuring and managing servers. It is one of the most famous tools out there for configuration management and is there since 2005 and has the major market share. It has a master-slave architecture and it’s an open-source tool with a long commercial record. There are a lot of companies that use puppets. Cisco, JPMorgan Chase, and Co. Raytheon TERADATA. So there are a lot of companies that use Puppet and it is currently the most famous and the most mature configuration management tool. When I compare it to the Chef, you can see that Chef is a bit ahead of Puppet. It is because Puppet is there since 2005 and Chef is relatively new. But it doesn’t mean that Puppet is not used in the market. It has a major market share, even more than Chef. 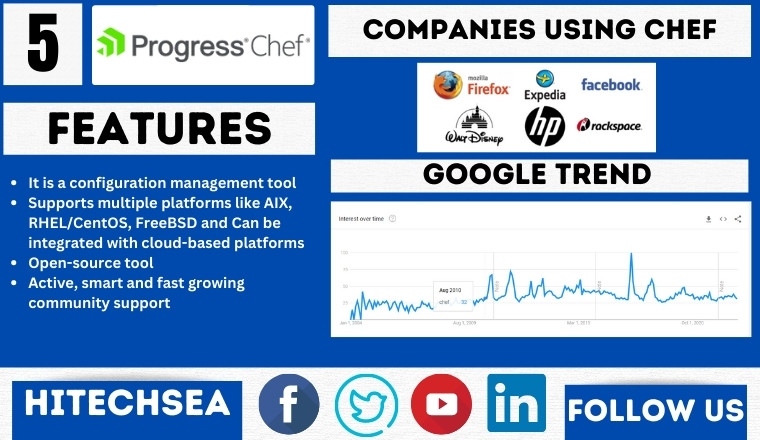 So Chef is again a configuration management tool. It supports multiple platforms like Aix Center, S, Free, and BSE and can be integrated with a cloud-based platform. It is an open-source tool with active smart and fast-growing community support. A lot of companies use Chef. For example, Mozilla Expedia, Facebook, Walt Disney, HP, and RackSpace. 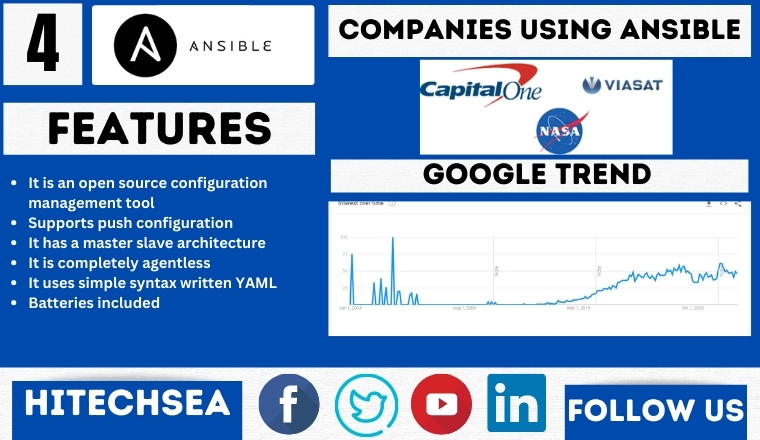 That has a master-slave architecture. And it is completely agentless, which means that you don’t need to install anything on your agents. It uses a simple syntax that is written in YAML. It is very easy to set up and very easy to use. And that is why it is the most trending configuration management tool right now. And you can see that it is competing with Puppet and Chef which are there in the market for quite a long time, right? And when you see that it is somewhere close to Chef from the graph itself and it’s pretty trending. And giants like NASA have adopted Ansible, you can definitely watch out for this tool. Then this year it will definitely acquire a huge market. 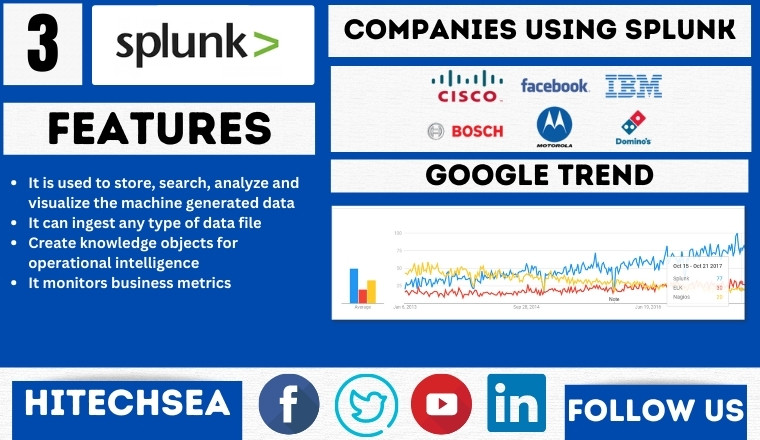 Let’s talk about Splunk. Splunk is basically used to store, search, analyze and visualize machine-generated data. It can ingest any type of data file. It can create knowledge objects for operational intelligence. It monitors the business matrix as well. A lot of companies use Splunk. Cisco, Facebook, IBM, Bosch, and Motorola Domino’s are a few of those. And when I compare Splunk with Elk and Nagios, although Nagavas is entirely used for continuous monitoring, whereas Elk and Splunk have many other uses as well, Magritte is entirely dedicated to continuous monitoring. But still, if you compare the three tools, you can see that Splunk is a clear winner. 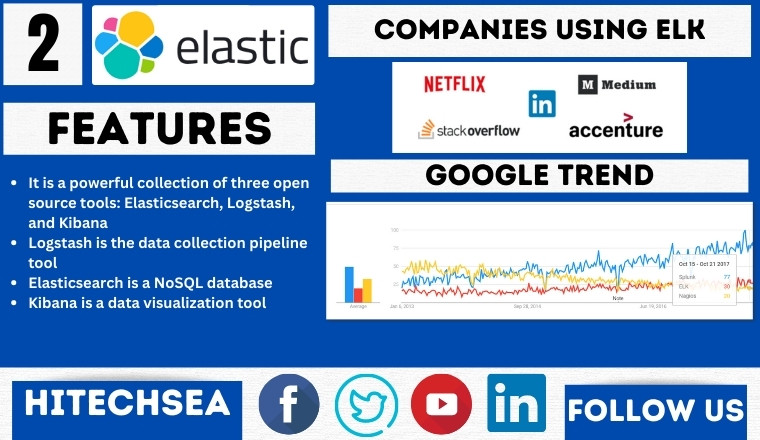 When I talk about Elk. So Elk is basically a powerful collection of three open-source tools. Elasticsearch logstash and kimono. Logstash is nothing but a data collection pipeline. It is the first component of Elk Stack, which collects data inputs and feeds them to Elasticsearch. Elasticsearch is a NoSQL database that is based on the Lucien search engine and is built with Restful API which is a highly flexible and distributed search and analytics engine. Cabana is basically for data visualization. There are a lot of companies that use Elk. For example, Netflix OpenStack Stack overflows Accenture and LinkedIn. And this is the same Google Trend graph that I was talking about. 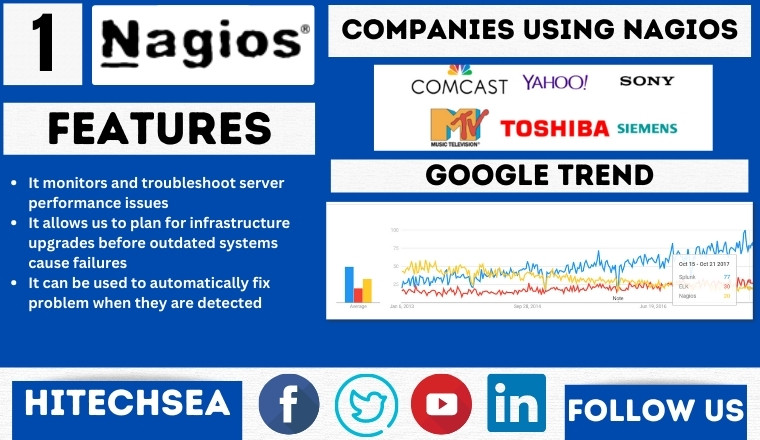 Let’s talk about Nagios. So Nagios is basically a continuous monitoring tool that monitors and troubleshoots performance issues. It allows us to plan for infrastructure upgrades before outdated system cause failures. It can be used to automatically fix problems when they are detected. Companies using Nagios, Are, Comcast, and Yahoo. Sony, MTV, Toshiba, Simmons, et cetera, et cetera. Now, you can see the Google Trend graph in the slides as well. 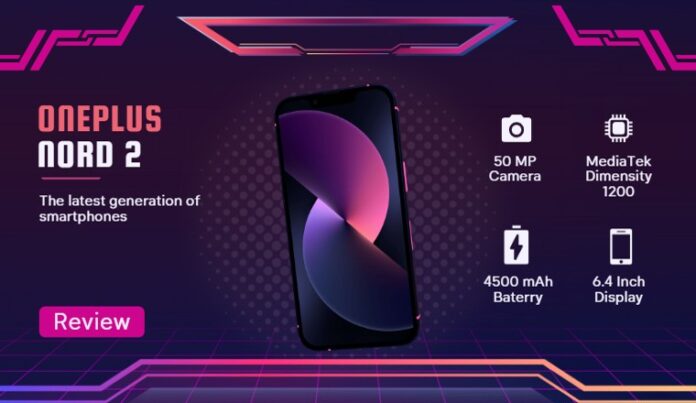 OnePlus Nord 2: Price In India & Reasons To Buy It
Next article 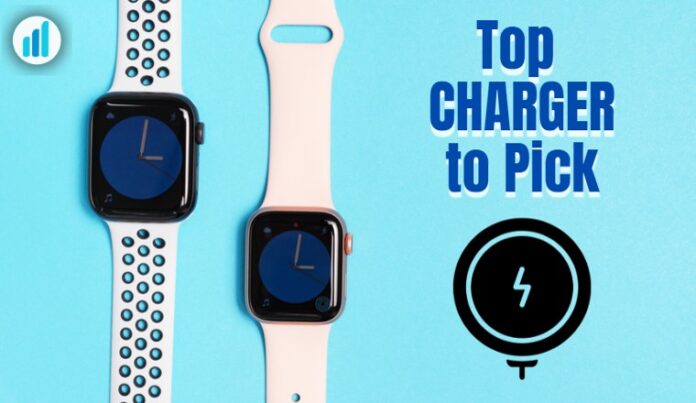 The tags or keywords for YouTube videos are important...

Google mobiles are characterized by a lack of trends,...

Much of our life on the Internet is based...

A Hidden Website Builder in GoDaddy: A Detailed Review 2021

Excellent for beginners and small websites, although it might...
Load more